No reputable air comfort website can publish a blog without doing a feature on Pittsburgh. Hailed as America’s most livable city; featuring a near perfect ratio of parks, restaurants, museums and gleaming high-rise buildings – not to mention home to Uber’s self-driving car pilot program, Pittsburgh is a lovely city. Not quite laid-back Midwest, nor frenetic East Coast; neither too close to pressurized Washington, DC, or too far from rural West Virginia–Pittsburgh is a hallowed oasis of decent living. 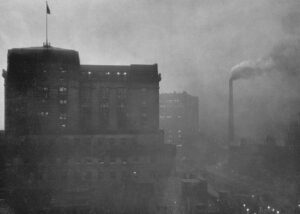 Yet, visit Pittsburgh even as recent as the 1970s, the city was covered in a blanket of soot, punctuated by the clangs of the mighty Carrie Steel Furnace. Since 1860, Pittsburgh was one of the most productive steel producers in the country. Additionally, during World War II, more than half of the steel required by the country was produced adjacent to the three rivers of Pittsburgh. While nationally, these steels mills were enormously successful, locally they were responsible for covering the entire city and its adjoining areas with a thick and dirty fog of soot. The Monongahela River looked more like a sheet of sludge than a natural body of water.

In the latter half of October, 1948, a noxious fog accumulated over Donora, a mill town in Western Pennsylvania. Residents found breathing difficult–and after a rainfall, the poisonous fumes were inescapable: twenty people lost their lives and almost half of Donora’s 14,000 residents were sickened. Yet US Steel was immensely powerful, factories remained open and the furnaces burning, without heeding its impact on the environment.

It took until the Clean Air Act of 1970 for regulations to protect the public from hazardous contaminants, but even then, Pittsburgh’s high noon looked more like dusk because of the heavy smog. It took until the collapse of the steel industry in the 1980s for Pittsburgh to face its day of reckoning. Confronted with deep unemployment and an uncertain future, Pittsburgh turned to its enduring assets: its ecological infrastructure and renewable resources, supported by the technological prowess of Carnegie Mellon University. Nestled near the Allegheny mountains, alongside three rivers, Pittsburgh is committed to being a vanguard of clean cities and becoming 100% reliant on renewable energy by 2035.

Adopting a strategic approach to city planning, the smart city project segments the electricity supply into microgrids rather than the traditional mammoth power station rubric. The result is a scheme of renewable energy systems that are simultaneously decentralized, yet also interconnected, greener and cleaner. As of today, more than 13,000 residents of Pittsburgh are employed in the renewable energy sector, compared with the 5,000 employed in coal and steel.

While Pittsburgh still has a considerable ways to go in cleaning up the pollutants from its air, its tenacity and zest for research and innovation, may just yield a breakthrough that will set it solidly on the world stage.

1 thought on “Spotlight on Air: How Pittsburgh Confronted Its Air Crisis”