Here at Quilo, we adore the elements – the marvelous renewable resources in the world around us that can be channeled for our comfort. These sentiments were behind the construction of the Quilo 3in1. We achieved cooling through wind, water, and minimal electric consumption. The Element section of our blog is a forum to explore the varied processes by which innovators, designers, engineers and regular folk are utilizing nature’s elements for green energy.

When we think of solar energy at home, solar panels come to mind. A house that was entirely dependent on the electric grid can now substitute some or all of its power consumption through converting the tremendous heat and light absorbed by the sun into electricity. But what happens when October arrives, the days shorten and the temperature drops? Are there still ways to harness solar power for the winter months? While solar panels may indeed be less effective during the winter, there are other intrinsic solar energy systems that can be incorporated into a house’s architecture that can make it resilient yet superbly energy efficient for the winter too. One methodology is called Passive Solar Design. It needn’t cost considerably more than a typical house construction, it is not reliant on extraneous mechanics; rather from the ground up, every part of the home’s architecture is designed to capture the freely available energy from the sun. 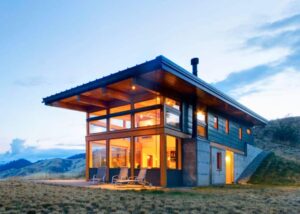 The linchpin of Passive Solar Design is using every aspect of the sun’s relationship with the home to cool the building during the summer and heat it throughout the winter. The sun’s trajectory over the terrain is carefully mapped and the house is designed to meet with sunlight at specific angles. The high-noon sun differs in summer than winter and knowing the parameters of this relationship can maximize the solar benefit. Using this foundation, there are three key principles in Passive Solar architecture.

Houses are rectangular with the wide portion facing south. Broad windows absorb the sun’s warmth but a precisely angled overhang lets in the low winter sun while blocking the intense summer sun. How often have you been in energy-efficient homes that use glass windows for heating and the result is a greenhouse effect in the summer and chilliness in the winter? Having this strategic overhang welcomes the sun when it is actually needed. In fact, simply by building in this way, a house can reduce its heating and cooling costs by 85%. 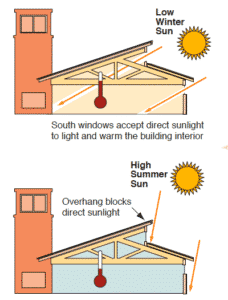 Imagine if those cold, northern cities, such as Chicago and Detroit, were built on a southerly-facing grid rather than the constrained north-south / east-west block system. It could literally alter people’s temperaments! 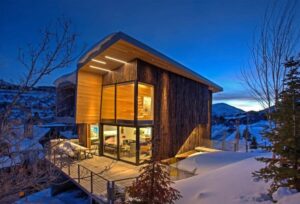 This Utah home features the large windows and overhang that is the trademark of passive solar design.

The materials used to construct passive solar houses are chosen for their high density such as concrete, ceramic tile and marble. These tightly dense materials absorb and store heat and then slowly release them, some by as much as 12 hours later. Have you noticed how cool marble is on hot summer days? While it stores the heat at day, it evenly releases it once the sun goes down, resulting in a fairly stable climate over a 24 hour period. These well-chosen materials also conduct heat evenly throughout their mass. For example, a home with a tiled balcony floor that extends indoors, while the outside portion absorbs the sun’s heat during the day, it conducts the heat indoors and releases it in the evening when the temperature drops.

This net-zero home in wintry Edmonton, Alberta, has concrete flooring that acts like a giant thermal battery soaking up the heat from the sun by day and releasing it slowly after the sun goes down. [Image from http://www.huffingtonpost.ca]

In partnership with thermal mass, insulation helps those specially selected thermal materials do their job for longer. Keep in mind the law of physics: homeostasis-nature likes equilibrium. If there’s a hotter area of the house, the heat will diffuse to the cooler zones and vice versa. Good insulation keeps the home heated or cooled for longer periods of time. Insulation techniques are the same as any energy-efficient home: ensure windows and doors are well-sealed when closed, repair cracks in walls, use quality insulation materials between walls. 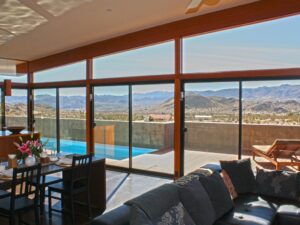 Now that you’ve actively constructed your passive solar home, you can revel in the passivity. Enjoy the fluctuating seasons as your home takes care of your energy bill without the need for you to open your wallet.